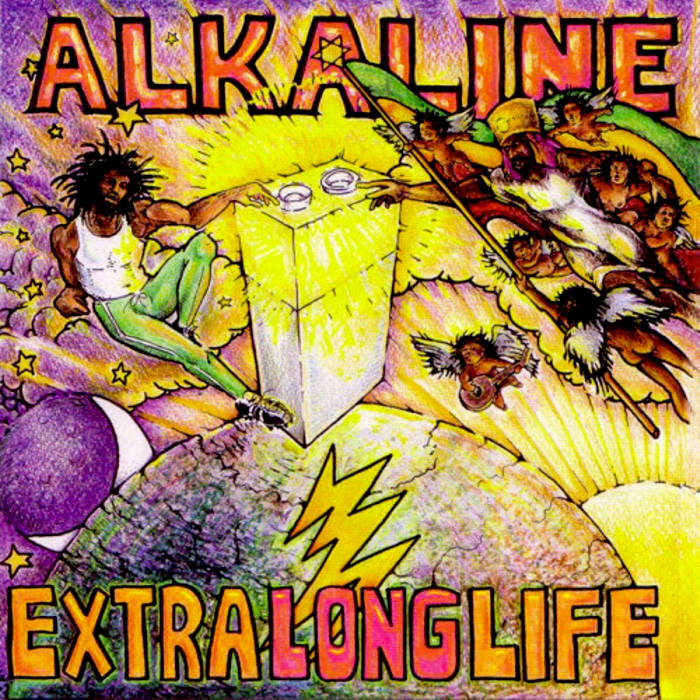 A Bit About AlKaline
BIG SUGAR once again are doing what they do best, making music. Singer/songwriter/producer and artist GORDIE JOHNSON cannot and will not keep away from it. So naturally in between BIG SUGAR records and just in time for summer comes another side to the sweetness that is Big Sugar. AlKaline: Extra Long Life.

To many BIG SUGAR fans some of this sweetness will sound oh so familiar. JOHNSON, GARRY LOWE, KELLY HOPPE and AL CROSS love of reggae music takes on familiar sounds. All in all these smooth re-mixes are soothing, energizing, spiritually powerful and at the same time the perfect music to chill to.

So this is AlKaline: Extra Long Life. AlKaline is a glorious dub project that re-mixes BIG SUGAR tracks from every previous full-length release, from 1992’s BIG SUGAR to 1998’s HEATED. In addition to these tracks there are two previously unreleased rhythms, “Strictly Got To **ill” and “Set Around”.

This is dub reggae. Dub is a predecessor to the concept of dance re-mixes which started on soundsystems in Jamaica during the late 60’s. Other dubs include last summer’s smash reggae pop single, “Turn The Lights On”. This actually bookends the CD as “Headlights” and “Alka Lights”. We also hear HEMI-VISION’s “Joe Louis/Judgement Day” which re-incarnates as “Maximum Judgement/Brown Bomber”.

This mood-tinged dub introduces listeners to WHITEY DON, a Toronto-based DJ and singer who rose to prominence in the early 1990’s as lead singer of Culture Shock, one of Canada’s premier reggae bands. Culture Shock’s bassist was current Big Sugar member GARRY LOWE. WHITEY DON is endowed with an uncanny knowledge of reggae music and is a master of the dialect. The longstanding friendship between Whitey Don and Garry makes for a dynamite display of toasting on the hilarious “Tief Da Bike”, “Deliverance” and the aforementioned “Alka Lights”. In the category of not so obvious are the blues steeped selections of “Johnny Thompson” and “Nuff Sugar”. On the latter, AlKaline unexpectedly has JOHNSON laying down a twangy gunfighter ballad guitar along with his skankin’ clavinet. If only Marty Robbins had lived long enough to hear this. “Johnny Thompson” juxtaposes B3 organ alongside the delta blues, with Chicago-style blues harp. The AlKaline sound goes back to the early 70’s dub-masters King Tubby, Lee “Scratch” Perry, and Scientist “Rambo” is the dub that has long been a staple of BIG SUGAR live shows. Which brings us to the integral member of the BIG SUGAR live experience. For the past three years, Big Sugar has had at the mixing console the undisputed master of live dubbery JEFFREY HOLDIP a.k.a. BOBBY O’LUGE. For the past seventeen years BOBBY O’LUGE has been at the controls for literally a who’s who collection of international reggae artists: Gregory Issacs, Augustus Pablo, U-Roy, Messenjah, and everyone in between. In 1999 BOBBY O’LUGE released “Hard End: The Luge Sessions”. The CD was critically acclaimed and Juno nominated for Reggae Album Of The Year.

This first AlKaline album gives credit to GJ for the spiritual artwork. Gordie shares that this type of artwork is what you saw on albums of that era. He wanted to create a visual of what he believes the music sounds like. Intricate and complex, spiritual yet still having a sense of humour as Gordie gives credit to Michaelangelo’s Sistine Chapel for his version of the lovely rastafarian angels.

Band member Kelly Hoppe on who is AlKaline: ” A long time bredda of Big Sugar bassist Garry Lowe perhaps? A co-conspirator in dub of bandleader Gordie Johnson? We do know that he has a deep love of space echo machines and vintage keyboards and working on his own schedule!”

“Deliverance” and “Rambo” under license from Hypnotic Records Inc.